Can you imagine a future in which solar cells are all around us - on windows and walls, cell phones or laptops? A new flexible, transparent solar cell developed at MIT is bringing that future one step closer. The device combines low-cost organic (carbon-containing) materials with electrodes of graphene, a flexible, transparent material made from inexpensive and abundant carbon sources. This advance in solar technology was enabled by a novel method of depositing a one-atom-thick layer of graphene onto the solar cell - without damaging nearby sensitive organic materials.

Photovoltaic solar cells made of organic compounds would offer a variety of advantages over today’s inorganic silicon solar cells. They would be cheaper and easier to manufacture. They would be lightweight and flexible rather than heavy, rigid, and fragile, and so would be easier to transport, including to remote regions with no central power grid. And they could be transparent. Many organic materials absorb the ultraviolet and infrared components of sunlight but transmit the visible part that our eyes can detect. Organic solar cells could therefore be mounted on surfaces all around us and harvest energy without our noticing them.

Researchers have made significant advances over the past decade toward developing transparent organic solar cells. But they’ve encountered one persistent stumbling block: finding suitable materials for the electrodes that carry current out of the cell.

“It’s rare to find materials in nature that are both electrically conductive and optically transparent,” said Professor Jing Kong (pictured left) of the Department of Electrical Engineering and Computer Science (EECS).

The most widely used current option is indium tin oxide (ITO). ITO is conductive and transparent, but it’s also stiff and brittle, so when the organic solar cell bends, the ITO electrode tends to crack and lift off. In addition, indium is expensive and relatively rare.

A promising alternative to ITO is graphene, a form of carbon that occurs in one-atom-thick sheets and has remarkable characteristics. It’s highly conductive, flexible, robust, and transparent; and it’s made from inexpensive and ubiquitous carbon. In addition, a graphene electrode can be just 1nm thick - a fraction as thick as an ITO electrode and a far better match for the thin organic solar cell itself. 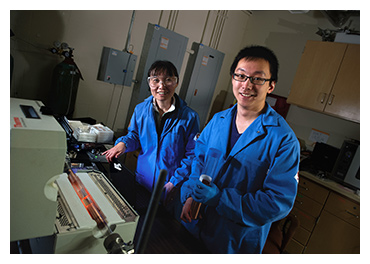 “The HTL dissolves in water, and the organic materials just below it are sensitive to pretty much anything, including water, solvents, and heat,” said EECS graduate student Yi Song (pictured right), a 2016-2017 Eni-MIT Energy Fellow and a member of Kong's Nanomaterials and Electronics Group. As a result, researchers have typically persisted in using an ITO electrode on the top.

A smooth graphene transfer
For the past three years, Kong and Song have been working to solve these problems. They first developed and optimised a process for laying down the bottom electrode on their substrate.

In that process, they grow a sheet of graphene on copper foil. They then transfer it onto the substrate using a technique demonstrated by Kong and her colleagues in 2008. They deposit a layer of polymer on top of the graphene sheet to support it and then use an acidic solution to etch the copper foil off the back, ending up with a graphene-polymer stack that they transfer to water for rinsing. They then simply scoop up the floating graphene-polymer stack with the substrate and remove the polymer layer using heat or an acetone rinse. The result: a graphene electrode resting on the substrate.

But scooping the top electrode out of water isn’t feasible. So they instead turn the floating graphene-polymer stack into a kind of stamp, by pressing a half-millimeter-thick frame of silicon rubber onto it. Grasping the frame with tweezers, they lift the stack out, dry it off, and set it down on top of the HTL. Then, with minimal warming, they can peel off the silicon rubber stamp and the polymer support layer, leaving the graphene deposited on the HTL.

Initially, the electrodes that Song and Kong fabricated using this process didn’t perform well. Tests showed that the graphene layer didn’t adhere tightly to the HTL, so current couldn’t flow out efficiently. The obvious solutions to this problem wouldn’t work. Heating the structure enough to make the graphene adhere would damage the sensitive organics. And putting some kind of glue on the bottom of the graphene before laying it down on the HTL would stick the two layers together, but would end up as an added layer between them, decreasing rather than increasing the interfacial contact.

Song decided that adding glue to the stamp might be the way to go - but not as a layer under the graphene.

“We thought, what happens if we spray this very soft, sticky polymer on top of the graphene?” he said. “It would not be in direct contact with the hole transport layer, but because graphene is so thin, perhaps its adhesive properties might remain intact through the graphene.”

To test the idea, the researchers incorporated a layer of ethylene-vinyl acetate, or EVA, into their stamp, right on top of the graphene. The EVA layer is very flexible and thin - sort of like food wrap - and can easily rip apart. But they found that the polymer layer that comes next holds it together, and the arrangement worked just as Song had hoped: The EVA film adheres tightly to the HTL, conforming to any microscopic rough features on the surface and forcing the fine layer of graphene beneath it to do the same.

The process not only improved performance but also brought an unexpected side benefit. The researchers thought their next task would be to find a way to change the work function of the top graphene electrode so it would differ from that of the bottom one, ensuring smooth electron flow. But that step wasn’t necessary. Their technique for laying down the graphene on the HTL actually changes the work function of the electrode to exactly what they need it to be.

“We got lucky,” said Song. “Our top and bottom electrodes just happen to have the correct work functions as a result of the processes we use to make them.”

Putting the electrodes to the test
To see how well their graphene electrodes would perform in practice, the researchers needed to incorporate them into functioning organic solar cells. For that task, they turned to the solar cell fabrication and testing facilities of their colleague Vladimir Bulović, the Fariborz Maseeh (1990) Professor of Emerging Technology and Associate Dean for Innovation for the School of Engineering.

For comparison, they built a series of solar cells on rigid glass substrates with electrodes made of graphene, ITO, and aluminum (a standard electrode material). The current densities (or CDs, the amount of current flowing per unit area) and power conversion efficiencies (or PCEs, the fraction of incoming solar power converted to electricity) for the new flexible graphene/graphene devices and the standard rigid ITO/graphene devices were comparable. They were lower than those of the devices with one aluminum electrode, but that was a finding they expected.

“An aluminum electrode on the bottom will reflect some of the incoming light back into the solar cell, so the device overall can absorb more of the sun’s energy than a transparent device can,” said Kong.

The PCEs for all their graphene/graphene devices - on rigid glass substrates as well as flexible substrates - ranged from 2.8 to 4.1%. While those values are well below the PCEs of existing commercial solar panels, they’re a significant improvement over PCEs achieved in prior work involving semitransparent devices with all-graphene electrodes, the researchers say.

Measurements of the transparency of their graphene/graphene devices yielded further encouraging results. The human eye can detect light at wavelengths between about 400-700nm. The all-graphene devices showed optical transmittance of 61% across the whole visible regime and up to 69% at 550nm. “Those values [for transmittance] are among the highest for transparent solar cells with comparable power conversion efficiencies in the literature,” said Kong.

Flexible substrates, bending behaviour
The researchers note that their organic solar cell can be deposited on any kind of surface, rigid or flexible, transparent or not. “If you want to put it on the surface of your car, for instance, it won’t look bad,” said Kong. “You’ll be able to see through to what was originally there.”

To demonstrate that versatility, they deposited their graphene-graphene devices onto flexible substrates including plastic, opaque paper, and translucent Kapton tape. Measurements show that the performance of the devices is roughly equal on the three flexible substrates - and only slightly lower than those made on glass, likely because the surfaces are rougher so there’s a greater potential for poor contact.

The ability to deposit the solar cell on any surface makes it promising for use on consumer electronics - a field that’s growing rapidly worldwide. For example, solar cells could be fabricated directly on cell phones and laptops rather than made separately and then installed, a change that would significantly reduce manufacturing costs.

They would also be well-suited for future devices such as peel-and-stick solar cells and paper electronics. Since those devices would inevitably be bent and folded, the researchers subjected their samples to the same treatment. While all of their devices - including those with ITO electrodes - could be folded repeatedly, those with graphene electrodes could be bent far more tightly before their output started to decline.

Future goals
The researchers are now working to improve the efficiency of their graphene-based organic solar cells without sacrificing transparency. (Increasing the amount of active area would push up the PCE, but transparency would drop.) According to their calculations, the maximum theoretical PCE achievable at their current level of transparency is ten percent.

“Our best PCE is about four percent, so we still have some way to go,” said Song. They’re also now considering how best to scale up their solar cells into the large-area devices needed to cover entire windows and walls, where they could efficiently generate power while remaining virtually invisible to the human eye.

This research was supported by the Italian energy company Eni as part of the Eni-MIT Alliance Solar Frontiers Center. Eni is a Founding Member of the MIT Energy Initiative.