Scientists at The Australian National University (ANU) have set a world record for efficiency for a solar thermal dish generating steam that could be used for power stations. The team designed and built a receiver for the solar concentrator dish at ANU, halving losses and achieving a 97% conversion of sunlight into steam. The breakthrough could lead to the generation of cheaper base-load electricity from renewable energy and help lower carbon emissions which cause global warming.

"When our computer model told us the efficiency that our design was going to achieve, we thought it was alarmingly high," said Dr John Pye, from the ANU Research School of Engineering.

"But when we built it and tested it, sure enough, the performance was amazing." The ANU team has already had commercial interest in the solar thermal system.

Concentrating solar thermal systems use reflectors to concentrate sunlight and generate steam, which can drive conventional power station turbines. It can be combined with efficient heat storage systems and can supply power on demand at a significantly lower cost than solar energy from photovoltaic panels that has been stored in batteries.

The global concentrating solar thermal capacity has grown by a factor of 10 in the past decade, with some of the largest installations in Spain, United States, and South Africa. 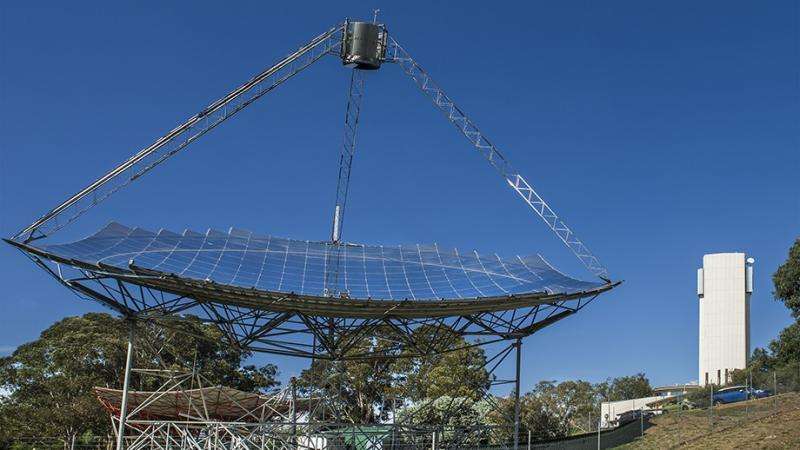 The team in the ANU Research School of Engineering is part of a broader group of scientists working in the area, with funding from the Australian Renewable Energy Agency, Dr Pye said.

"Ultimately the work in this project is all about reducing the cost of concentrating solar thermal energy. Our aim is to get costs down to 12 cents per kilowatt-hour of electricity, so that this technology will be competitive," he said.

"This new design could result in a 10% reduction in the cost of solar thermal electricity. "I'm optimistic that our technology can play a role in the grid, by helping to provide power at night without fossil fuel power stations running."

At 500 square metres, the ANU solar concentrator is the largest of its kind in the world. It focusses the power of 2,100 suns onto the receiver, through which water is pumped and heated to 500ºC.

The receiver design is a cavity that resembles a top hat with narrow opening and a wide brim. Water pipes spiral around the underside of the brim and up into the hat.

The sunlight is focused onto the pipes, heating the water as it enters at the brim and spirals up into the cavity. The water reaches peak temperature in the deepest reaches of the cavity, which minimises heat loss. Heat which does leak out of the cavity can be absorbed by the cooler water around the hat's brim.

The power of the concentrated radiation is so strong that it can damage componentry if not aligned properly, so the team calibrated the dish using the full moon.